Each style decision a cartographer makes on their maps’ features will contribute to the holistic ambience of the map. For example, a map’s tone can change in an instant just by switching typefaces. You might have even had one of those revelatory moments when a typeface gets changed accidentally in flash of serendipity, and suddenly your map has an updated fresh style and direction.

Color choices, amount of colors, graphic design effects, line weight, and a lot of other things in addition to typeface choices are among the decisions that a cartographer makes to achieve – or discover – a particular ambience in their maps. Cartographic water styling is one of these effective ways to achieve a map’s overall mood. In this post, I’m going to give some quick steps to achieve a satin waterbody look in Adobe Illustrator. It’s super easy and fun, and I’ve been doing it for so long that I sort of took it for granted. However, in the few years that I’ve been sharing my maps publicly (I’ve presented on my tendency to be a hermit of sorts) people have asked “How did you do that water effect?” It is invariable that at least one person will ask this question after I’ve presented or posted a map that has this waterbody effect. It’s also a guarantee that I will be excited to chat about it since it is likely that I will also learn from the questioner while sharing with them this water technique. 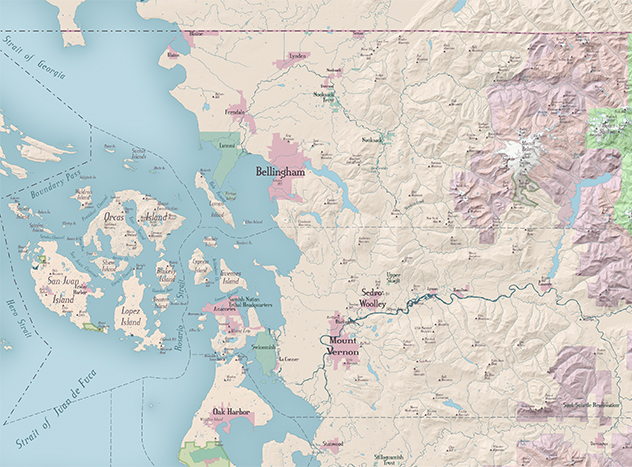 There are so many layers with their visibility turned off in this map because it is only about 40% complete. Sharing still, because this map is the one that the Skype call stems from.

Due to the combination of taking this water effect for granted and having some hermit propensities, I had almost convinced myself that it wasn’t worthy of posting about this technique. But after scheduling a Skype meeting last week to discuss this very technique after someone saw a map I shared on Instagram, I decided, “Why not?” So here are some simple steps to get a satiny water look for your maps in Adobe Illustrator. This post focuses on open water, or water that is not fully inside the map extent (i.e. the waterbody is a very large part of the overall map, and is cut off by the edge(s))

Some of these steps will not be necessary depending on your map’s water data.

*TIP! If you are not dealing with open water in your map, but rather your map has waterbodies that are fully inside your map’s extent, like the lakes in my map above, then you can SKIP TO STEP 4. tl;dr: It’s the Inner Glow Effect!

1. Ensuring your land and water polygons are well aligned

A map’s land data doesn’t always align perfectly with water data shoreline. The cause for the mismatch could be that the data sources are different, or that they were created for different scales. Whatever the cause, it doesn’t matter, because you can fix the misaligned polygons with Adobe Illustrator’s Pathfinder tools. In the interest of brevity, I’ll just focus on the most common scenario that I encounter with mismatched land/water polygons.

Check out Orcas Island (large island in the center of the image below), and the white gaps around it indicating the difference between the water and land layers. The detail of the World Ocean layer is so much less than the detail of the Land layer that the World Ocean layer doesn’t even include Waldron Island to the northwest of Orcas. For the best results of the satiny open water look, I like to have all the land details including these tinier features like small islands in the effect at first. If somewhere in the process, these smaller features become an issue to the aesthetic, they are easy to remove. 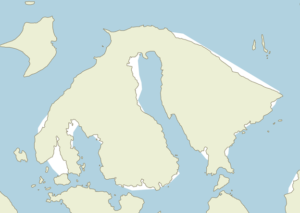 2. Creating your own Open Water!

If your open water polygons are perfectly aligned with your land polygons, then this step will not be necessary, but the next step will.

Because my land and open water polygons are not well aligned, I’m going to create my own open water polygon inside of Illustrator. In fact, I’m just going to delete my World Ocean layer, but hang onto your original water layer if you think you might need it for reference later on.

To create a new layer in Adobe Illustrator, just click the “Create New Layer” icon at the bottom of your Layers panel. Drag this new Layer beneath the land layer, and name it whatever is appropriate. I’m going to name mine “Salish Sea” since this is the encompassing term for all the inlets, channels, bays, and sounds that make up this water body.

Now you’re going to want to draw a rectangle in your new waterbody layer that is larger than the land that makes up the shoreline. So click the Rectangle tool, or type the letter “M” for the keyboard shortcut to get the Illustrator Rectangle tool, and draw your polygon. See the video below for how to do this.

3. Clip your new Waterbody to the Land

Ah, the joy of Illustrator Pathfinder tools. Before you clip your waterbody to the main land layer, you’ll have to make sure that all your land is in one path. To do this, you’re going to use the Unite Pathfinder tool. If you have only one polygon (closed path in AI) then you should be ok. Since my land from which I want the satin waterbody effect to emanate is comprised of several islands, a mainland USA polygon, and a mainland Canada polygon, I know for certain that I need to Unite my land shapes. These shapes must be closed paths! Double check this before moving forward.

3A – Unite the land polygons

First duplicate  all the land polygons layer(s) – there could be multiple – that you want to use for the satin waterbody effect. If there happens to be more than one layer that you are duplicating, make sure to put all the artwork from the duplicated layers into one single layer before uniting. With all the closed paths selected in this new duplicated layer, click on the Unite Pathfinder tool. If all your paths are closed, this will cause polygons that are touching to be merged into one single closed path, and will put all the paths, including islands, into one discrete clipping path. Check out the video below (*note that after clicking the hamburger menu, the “Duplicate Layer” option was not visible, but that is what you will choose).

Uniting your land polygons with the Unite Pathfinder tool

3B – Subtracting land area from waterbody

This easy part in bullet form. Here we go!

Watch this video for the quick version:

I’m not quite sure why I used quotations around ‘inner glow’ because that is exactly what it is called in Illustrator. This is the actual step where you create a satiny look. However, steps 1-3 are usually necessary when you’re dealing with open water in your map. Again, in bullets, followed by a video:

Your map. Your style.

The great thing about this satin waterbody effect is that it doesn’t tie you into one particular style. It is used by many cartographers in a variety of design styles. In addition to my map in the intro for this post, here are some maps I’ve made that use this satin waterbody effect that each have a very different ambience: Mid-Century; Art Deco, and somewhat of a play on Victorian era styles. 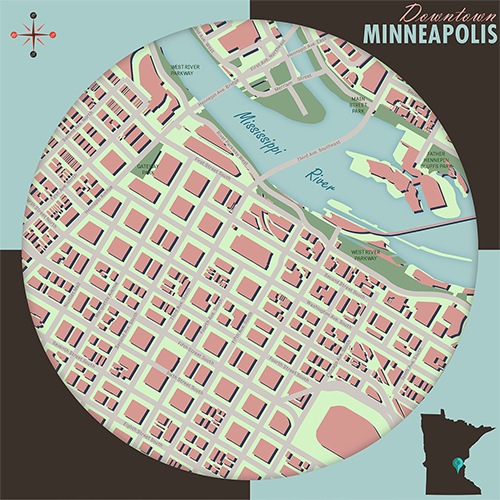 Simple square mid-century style map created for NACIS 2015 demo, Minneapolis, Minnesota. Most of the artwork in this map is very flat. The water has a slight application of inner glow to give it more of a satiny feel.

Art deco buildings in Montreal in an art deco style 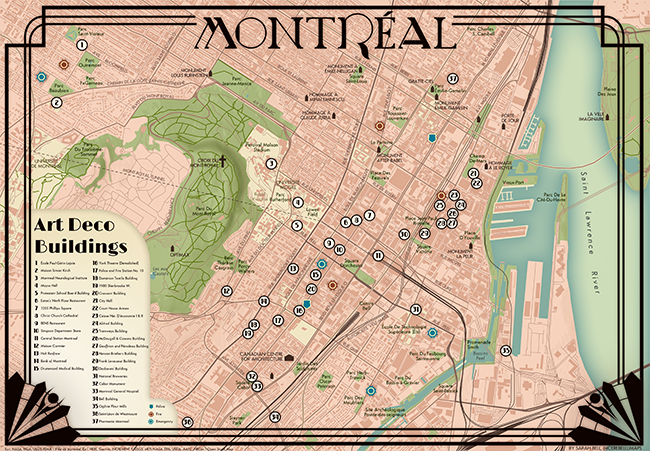 Map created for NACIS 2017 presentation showing all the Art Deco buildings near the conference. I really wanted to capture the saturated and deepness of what Art Deco styles make me feel. 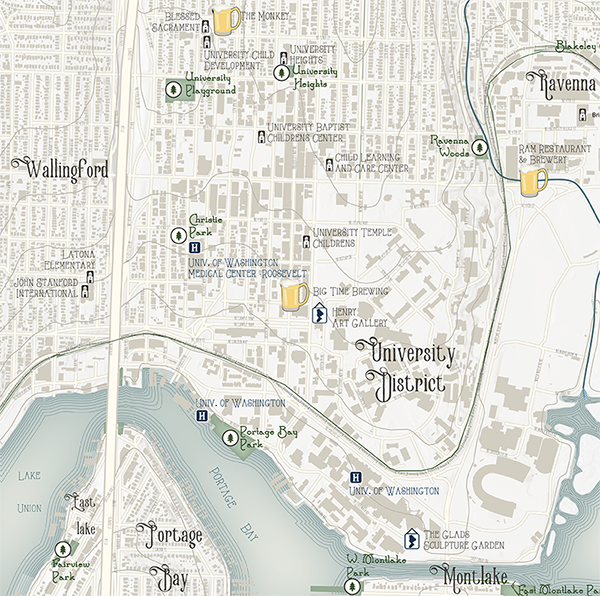 University of Washington demo map. For the water color here, it is actually a pale bone color, and any blue in the water is coming from the color I applied while adding the inner glow (step 4).