Remember that time when we mapped and animated the 2018 Formula 1 racing circuits?

You know, it had that wild, neon pink, retro color scheme… 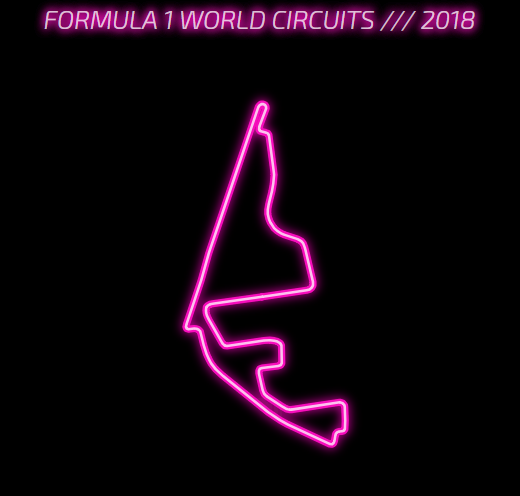 I promised to “walk through how D3 and flubber were used to make all this come together”.  Well then, we’ve arrived here, and along the way we looked at how to begin making web maps in D3 followed by how to wrap your mind around web map projections.  Be sure to check out those posts, too.  The concepts build on top of each other in the hopes of making this one easier to digest.

Getting to the main point:

How do you stack and animate geographical features that are located in different places?

Map projections play an important role in this technique.  I chose to project the Formula 1 circuits using the Mercator projection because it is good at maintaining the shapes of small features, specifically when rotated to each feature’s centroid and zoomed in closely.  Mercator thus is “conformal” in projection terminology.  And since it can be a pain to remember: zooming in closely on a map means using a large, local map scale.

I’ve broken out the inner workings of the stacking and animating technique into 3 separate parts which are very much alive and kicking in the CodePen demos below.  Each Formula 1 circuit is first translated from geographic coordinates to SVG space (projected) by rotating and scaling the Mercator projection to every one of these circuit features.  This is what fundamentally makes them appear stacked because they now occupy the same area of the SVG element.  Finally, instead of showing all of them at once, we only show one circuit’s shape at a time and animate to the shape of the next circuit in the stack.

Part 1: A two-dimensional globe is drawn with an orthographic projection to show how projections can be rotated to specific locations on Earth.  In the bottom area of this demo–using the Mercator projection with a large map scale–we also rotate to each circuit’s centroid location and then add the circuit to the stack.

Part 2: Skip the leisurely world tour and immediately make a stack of circuits.  Again, each circuit is drawn as an SVG <path> element with the assistance of a uniquely rotated Mercator map projection.

Part 3: By now we know how to quickly create a stack of disparate geographic features. The focus in this final demo is on the animation that morphs between all the circuits’ shapes using the flubber JavaScript library.

Following our tutorial on creating maps in the browser–Get Started Creating D3 Maps–I thought it would be fun to explore map projections on the web with JavaScript.  D3 in particular gives us the opportunity to be very creative in how we render geospatial data with the ability to choose from and customize many different projections.

Different map projections exist for different reasons and any choice made is a trade-off for which property you’d like to preserve from your original data, including area, shape, angle, or distance.  For example, if you need to maintain the correct areas of countries, then you may have to give up caring about their shapes becoming distorted.  (This would be called an equal-area projection, by the way.)  There is no perfect map projection to fit all situations.

Center or rotate a web map?

Most of the web maps we interact with use some variation of the Mercator projection. It is known as a conformal projection and nearly always is rotated in a way that is visually very familiar and comfortable to us: north is up, south is down, and land masses closer to the poles are distorted in area and appear much bigger than they actually are.

Moving around on this kind of web map changes the center location, which is similar to shifting a paper map around on a table.  When you navigate up to view Greenland in a web map, it would be like moving a paper map down, right?  Greenland’s area is still distorted and bloated.

But when you interact with a globe in real life you rotate it.  The same is actually possible for all map projections, and in D3 we can rotate along 3 different axes.  If the world’s landmasses look unfamiliar when rotating a map’s projection it doesn’t mean we are doing something wrong.  Perhaps unconventional, but not necessarily wrong.  Our three-dimensional data is simply being instructed how to reshape itself onto a two-dimensional map.  If we were to rotate the same example web map to Greenland its area would be much more accurate, but at the cost of other landmass areas becoming distorted.

Here’s a demo showing the differences between centering and rotating.  The top row uses the Mercator projection while the bottom uses the Orthographic projection which resembles a globe (but a flat globe in 2-D).

What if we were gods and could sculpt perfectly circular islands of the same size and then place them evenly around the planet?  I suppose even on our best days we don’t have this power–sorry–but we can at least draw them on a map.  These regularly spaced circles, called Tissot’s indicatrices, show the unique distortions of each projection by stretching, warping, and also moving the circles around.

The regions in the next demo that contain evenly distributed, small circles exhibit very little or no distortion.  But as the circles grow, morph into other shapes, or move away or closer together, we are given visual cues about how the distortions of a projection affect the sizes, angles, and distances between geographical features throughout the map.

Which one is your favorite?  Are any of these cool enough to be a tattoo?

If you want to experiment with map projections, visit Get Started Creating D3 Maps and start making changes to the Canvas demo or SVG demo.

Look for the JavaScript code block starting with var projection = d3.geoMercator() and replace it with another projection documented at d3-geo, d3-geo-projection, or perhaps d3-geo-polygon.

Have fun distorting the shape of the world!

JavaScript is fun, and D3 is great.

At Petrichor Studio we like to use D3 for our interactive, web-based visualizations.

D3 is sometimes known for imposing a learning curve on dataviz folks and JavaScript developers, but I am convinced that once you’ve tried it out several times–regardless of success or failure–familiar patterns will start emerging in the code.  There are plenty of wonderful resources and blogs that were crucial in helping me begin to understand how to harness D3, and I have included some links at the end of this post in case they might help you out, too.

Below are a couple code samples to help you get started making a simple world map in your browser.  One approach shows you how to render GeoJSON data in your browser as graphics using SVG, while the other approach uses Canvas.  They can be compared side-by-side and I encourage you to identify their similarities and differences.

If you are just getting started with D3 the best advice I can give is simply what worked for me: read other people’s tutorials and code samples, all while experimenting on your own until perceived failures become replaced with tiny successes. The tiny successes will become bigger over time and failures won’t seem so scary or annoying anymore.

Good luck! We’ll revisit these topics in more depth by focusing on Map Projections on the Web.

Check out this animated map of Formula 1 World Circuits!

Even though it is already May, the college basketball excitement and hype of March Madness inspired me to do a sports-related data visualization or mapping project.  It was a lot of fun working with animations for the gerrymandering topic in What’s Your Vote Worth?, and it eventually crossed my mind to explore Formula 1 circuits.

What we do here is stack all the circuits on top of each other, like misshapen pancakes, and show you only 1 at a time.  Even though they’re scattered throughout several continents, here they share the same space and the same map scale.  Then, we continually move on to another circuit by morphing between the current shape and the next shape in the pancake stack.  The world reference map is also updated to provide geographical context.

An argument for doing this (other than just because I can) would be that you can directly compare the circuits’ shapes, sizes, and orientations, without having to find and navigate to each circuit separately as with a traditional web map.

I wanted to style this with an 80’s retro racer vision of a neon, cyberpunk future we’re all speeding towards, so we employed SVG and CSS effects along with an awesome font to achieve the final look.  (Thanks, Sarah!)

The stacking and morphing is all done on-the-fly in JavaScript with some neat map projection and shape animation techniques.  We’ll walk through how D3 and flubber were used to make all this come together in upcoming blog posts.

*Check out our What’s Your Vote Worth? data viz storytelling to see this effect in action.

Tired of falling down into web maps?

Zooming in, zooming in, and zooming in from outer space down to the Earth’s surface got you feeling sad?

Here’s another idea: demand that geographic features come up to you. Web maps typically require you to zoom in and may give the sensation of “falling down” or “diving in” towards the Earth’s surface. Why not make this everyday interaction become more user-focused?

See the Pen Bring Up State – D3 by Jacob Wasilkowski (@jwasilgeo) on CodePen.

In this JavaScript code sample written with D3js, called “Bring Up State”, we serve—provide, give, deliver—a state polygon that has been clicked on to give it full focus. This is the opposite from expecting your audience to freely zoom in as with traditional web map experiences. This sample goes one step further by fading away the remaining states in the background to alleviate visual clutter and bring attention to the current state. Take a look at the code to see how it is all glued together.

Just click—no need to fly down closer to the Earth—and the visualization will do the heavy lifting of bringing up the geographical feature directly to you.