Several weeks ago, I wrote about a fantasy map named Kystfjell (pronounced kist-fyell, but feel free to say kist-fell), which translates from Norwegian to “coastal mountains.”

In that first post, I mentioned I’d be writing an upcoming Part II that describes some of the design decisions, including place name and language, character illustration, and geographical juxtapositions within the Kystfjell map. I also promised some free Adobe Illustrator libraries based upon this design. So here we go! This is Part II. If you want to jump straight to the free stuff, HERE is a truncated design assets library that I made, inspired by this map. But wouldn’t you want to know the background of those libraries and of Kystfjell?? If so, keep reading.

Important to know: This map was made using the M4CC extension inside of Adobe Illustrator. For information on how, read the first post on this Kystfjell map.

The difference between the actual geography and Kystfjell’s geography

As cartographers, even though we aim for a known level of accuracy and precision, we still are abstracting spatial data to a digestible level. The most obvious example of this is scale. Maps are typically a 1 to greater-than-1 scale – at least the examples we usually think of when we hear the word “map.” Although, consider this beautiful Anatomy of the Teeth poster by medical illustrator, Lydia Sharp. In a sense, Sharp’s poster, and microbiology illustrations like Shannon McMann’s Brain Cell diagram are maps of a 1 to less-than-1 scale. Maps (and dataviz) of all kinds have abstracted the representation to its necessary parts, so that the visualization’s purpose and message can be easily understood by the intended audiences.

When creating the Kystfjell map, although I downloaded real geographic data over coastal Norway at a scale of 1:140,000 (see image below), this map was fantasy. I can move mountains!

And I did. I was not tied to usual intentions of communicating an abstracted reality for the purpose of data comprehension or actual geographical navigation. While I frequently do draw illustrations that have nothing to do with maps, I have never applied the liberty of mapping things where I want to for the purposes of a fantasy map. Kystfjell’s scale is much smaller (the world in the map is much larger than the downloaded data’s actual scale), as a series of large interacting societies. This means that instead of the actual geographic extent’s ~30-40-mile width, my map is about 1,000 to 1,800 miles wide. Although who knows? There is still time for Kystfjell’s geomorphology in my imagination, as the book is still being written.

Check out this map diagram below. In it, I’m showing the extent of the Kystfjell map, and changes that I made to the data that were included in my original download into Illustrator. 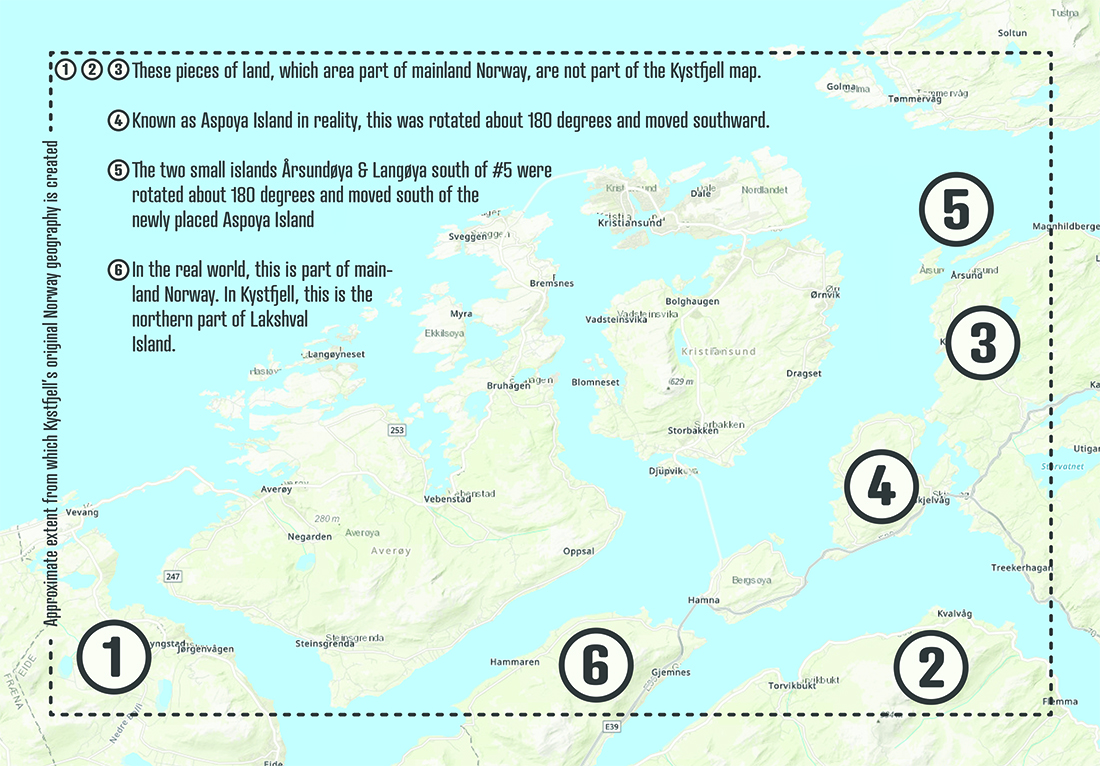 Here is the final land juxtaposition for the Kystfjell map. 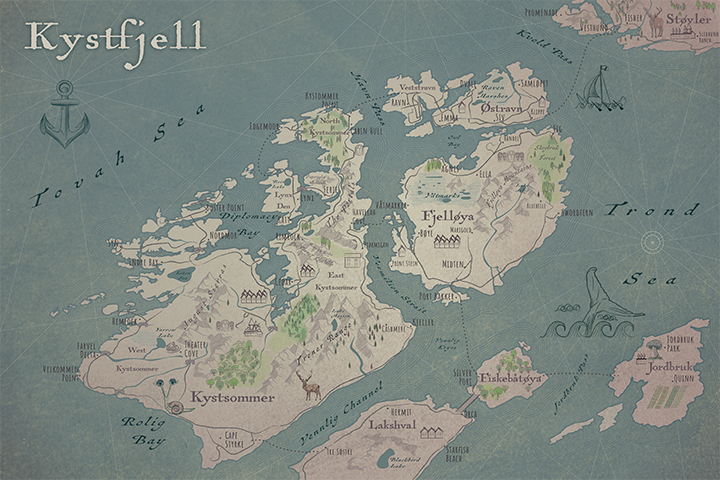 Please consider the Kystfjell fantasy map unfinished. In fact, I’m not certain that the land will retain the “Kystfjell” name over time. When I get some time to finish it, the first sentence of this paragraph will be deleted. So will the sentence preceding this one, along with this sentence, and perhaps a few subsequent ones. While the map is unfinished, the overall aesthetic will remain. Why am I posting about the design when it is not quite finished? In part I several weeks ago, I promised some free Adobe Illustrator libraries, along with a post about Kystfjell’s design “soon.” Now feels like soon, so let’s talk about design!

There are really five basic colors on this map, and every other color stems from those hues. The sixth color is the highlight color. I don’t know how everyone else thinks about color, but for me, what I call highlight color is essentially just that – the color that all other colors travel to as they get lighter. So if you can imagine a gradient for each of the base colors, where the darkest hue in the gradient is the base, and the brightest hue in the gradient is the highlight color, then you can imagine that the colors within those gradients are fair game for the particular project. In most of my work – maps and other illustrations – the highlight color is almost never basic white. This retains rich tones throughout the illustration. With every map I make, I try to keep the colors at a minimum, so I made swatches of about six or seven colors within each of these gradients and only drew from those colors. I use this color method for a lot of things that I do, but when it comes to mapping for customers with specified style guides, I’m often bound to a basic strict small group of contrasting colors and/or complimentary colors. But not for Kystfjell! 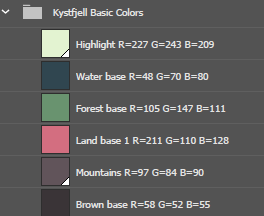 The mountain base color-to-highlight color gradient

You can find the Kystfjell base colors and other Illustrator Assets here, where I’ve shared them publicly. Notice how the colors look much flatter and more saturated than they do on the map. Recall how I’ve created gradients from each of these base colors to the highlight color (image above this paragraph), and from that gradient, created a palette made from those gradients. Doing so gives the map some depth. Also, I’ve added some transparency masks explained below. 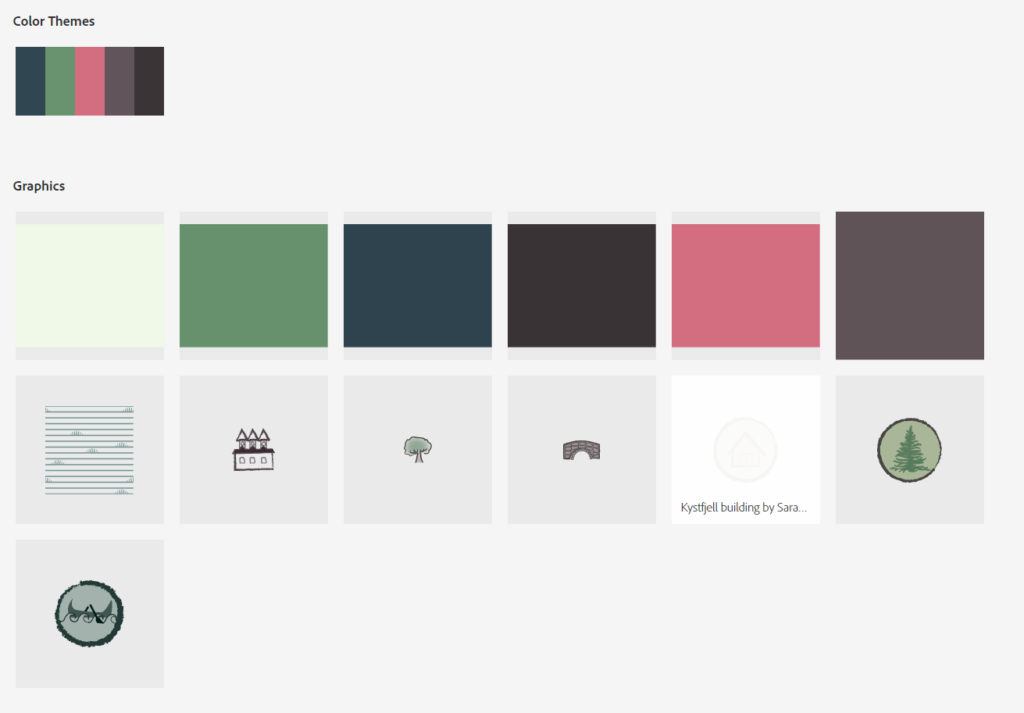 Save these free assets by clicking on the image

I was able to apply a papery texture to the Kystfjell Map by using Adobe Illustrator’s Transparency Mask option. This post isn’t going to include a step-by-step tutorial on how to use transparency masks in Illustrator, but perhaps such a post as it relates to cartography is called for in the near future. It is just important to know that this is how this map was textured. There are a lot of great YouTube videos and online tutorials provided by designers that share how they use transparency/opacity masks. But here is a tiny window into my particular approach to how I used a transparency mask to achieve a papery look in the Kystfjell map. Ultimately: 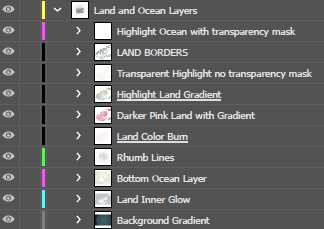 Of the layers inside my Land and Ocean Layers above, the following have a transparency mask applied. The mask was made from a photo of crumpled paper:

When applying a paper texture to a transparency mask on multiple layers, one trick I like to use is to make sure that the paper texture image is the same one for each layer and the X, Y registration for this image is identical each time you paste it. Copying artwork and pressing CTRL + F / CMD + F will paste artwork in the exact X,Y registration in front of  your other artwork in a layer, and CTRL + B / CMD + B will paste it behind your other artwork to whichever layer you are pasting.

Stacking the 10 ocean and land layers and the shorelines layer 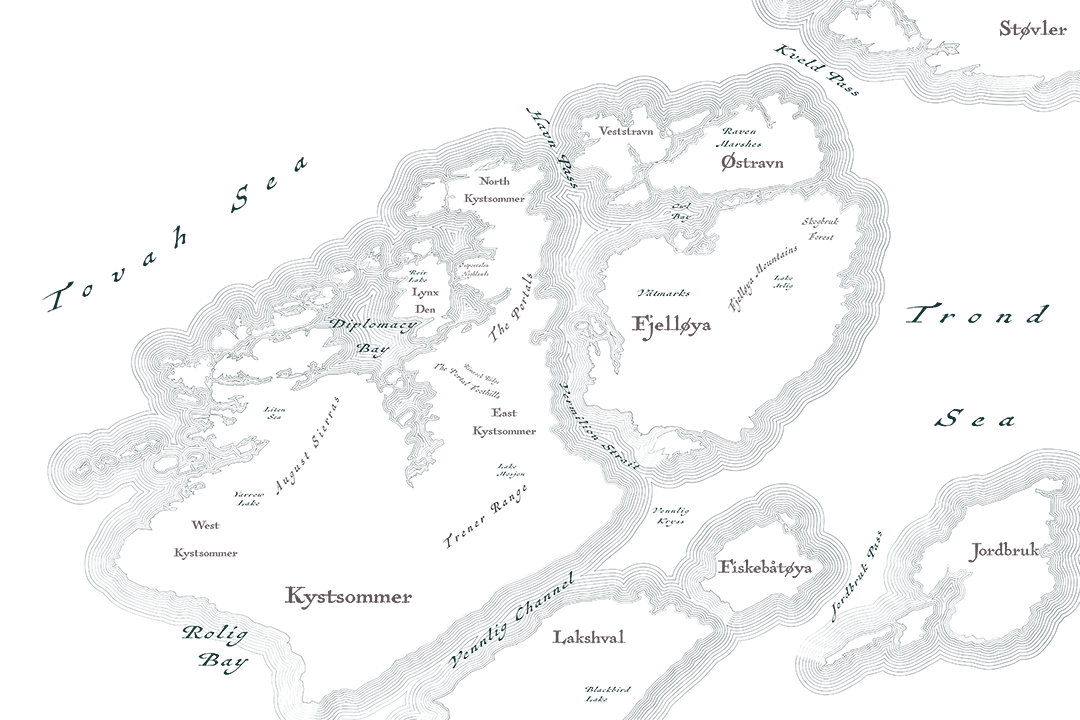 I wanted the Kystfjell elements to appear whimsically hand-drawn. To avoid a clean digital look I used brushes from the Artistic_ChalkCharcolPencil brush library that is provided with Adobe Illustrator, as well as a few other brushes. You can see some of those brushes applied in these complimentary graphics that I’m sharing here.

Each aspect of this map was an adventure: location scouting, character developing, mountain drawing, and place-naming. As stated previously, this is my first fantasy map, so creating placenames was unexplored territory. I wanted the names to be of Norwegian influence as a nod to my heritage, but also easy for an English speaker to read. Some of the names are combinations of Norwegian words, or combinations of Norwegian and English words. And some locations are English words. I wanted Norwegian readers to read the names as actual names as well, so I consulted my friend that I have known since middle school, Benjamin Nelson. Ben is fluent in Norwegian, lives in Norway, and is married to a Norwegian woman, Linn Monica. They reviewed the placenames to ensure the names did not get translated as garble to a Norwegian reader. Also, it was pretty important to me that I wasn’t unintentionally using a word that was crude. Many thanks to Ben and Linn Monica for their review of the Kystfjell map placenames!

It is true! Kystfjell is a place in a story that I am writing! As the story gets written, the map is sure to change and characters are sure to be added. I anticipate that I will generate many maps and illustrations as the story moves forward.

I’m always excited to see the fantasy maps that others are making, as well as read about the stories that inspired those maps. Please share yours if you’d like! And happy mapping!

Hey, it’s me with Kystfjell in the background. Action shot! Whoa.