This post presents the What’s Your Vote Worth? map. This map began as an exploration of the U.S. Electoral College, and grew into a broader examination of voting in the United States. Our intent was to present America’s proven capacity to improve Equal Access for its voters, but also probe some areas where disparity still exists in the American voting system.

Over the past twenty-five years, half of the U.S. Presidents were initially elected without a majority of the popular vote despite winning the Electoral College. Because of the varying population sizes between American states, the Electoral College simply cannot be equally allocated among these populations. This means that sometimes the winner in a general election does not always reflect the majority of Americans’ votes. This also means that for a state like Texas, with a population of nearly 28 million, it would take 3.21 voters in a general election to equal just one Wyoming voter (Wyoming’s population is roughly 585 thousand). This is just one of the many ways that your geographic location impacts your rights when it comes to voting in America.

Your geographic location impacts your rights when it comes to voting in America.

Preview What’s Your Vote Worth? map

Other ways that our geographic location impacts our voting access are: the amount of time we have to vote; the way we can – or cannot – cast our ballots; whether or not we need an ID to vote, and more, as discussed and explored in our What’s Your Vote Worth? map.

We also discuss race, gender, and how the United States has demonstrated the capacity to progress in order to increase voting access, and at times move closer toward the intent of the Equal Protection Clause and its stated “equal protection of the laws.” It is in this spirit that we created the What’s Your Vote Worth? map. 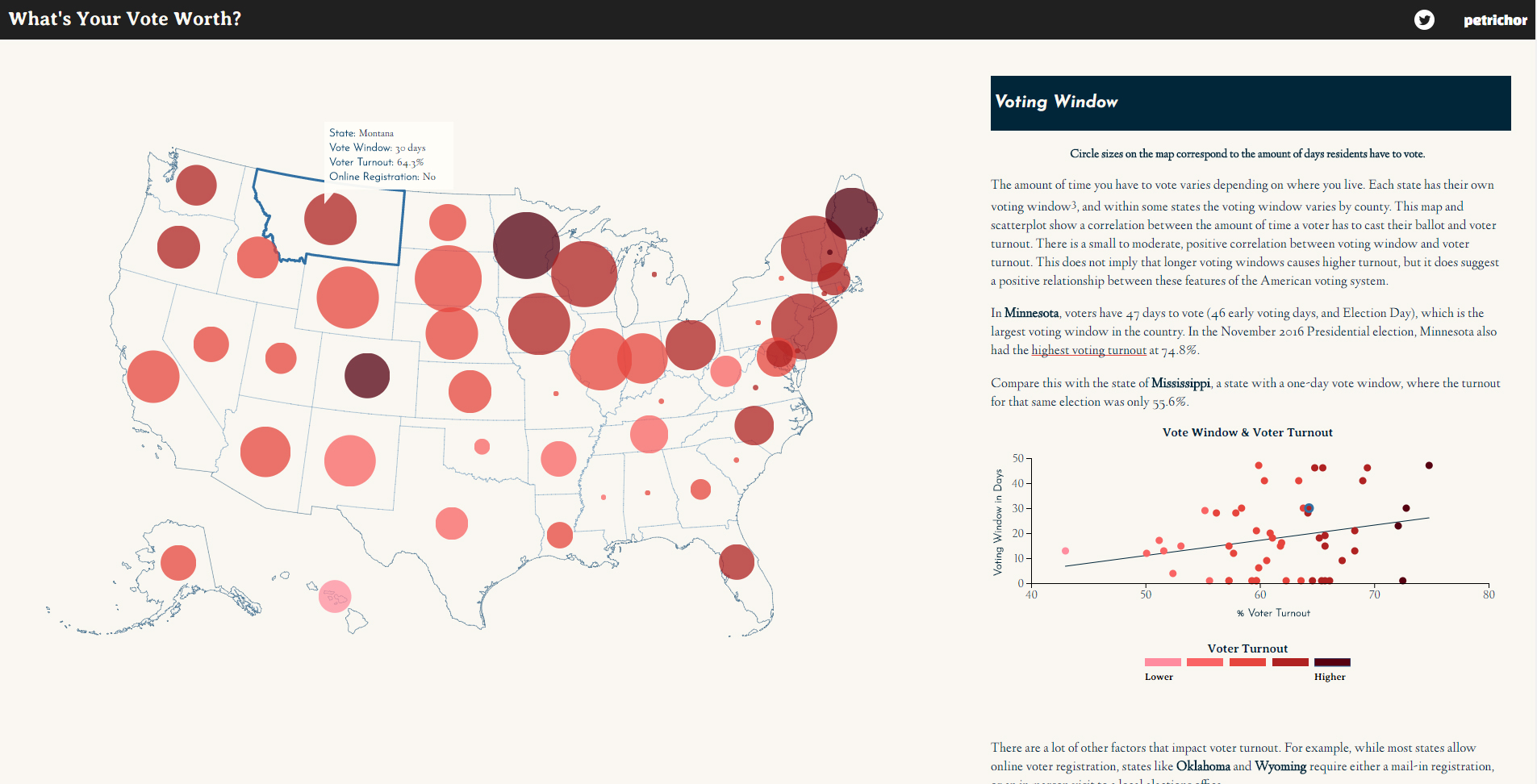 Voting Window by state, as viewed in desktop version

Due to the depth and complexity of the American voting system, we had to eventually limit the analysis of this map to a few select examinations. Each one of this map’s sections could be an entire application in itself. We also had to make decisions on which topics to include, and which to explore in a later application. For example, this map only touches upon Voter ID laws, when in fact, Voter ID laws are a very serious hindrance to equal voting access in America. Throughout the entire process of this map’s construction, we made great efforts to ensure our map contains well-researched factual information.

We invite discourse that this map may inspire, in hopes that it remains respectful and productive.